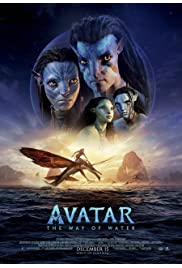 Jake Sully lives as chief of the Omaticaya and raises a family with Neytiri, including his adopted daughter Kiri, who was born from Grace Augustine's inert Na'vi avatar, and a human boy named Spider, the son of Colonel Miles Quaritch, who was born on Pandora but was unable to be transported to Earth in cryostasis. This takes place more than a decade after the events of the first film. Humans return to Pandora to colonize it, building a new main operating base called Bridgehead City, to the dismay of the Na'vi. Quaritch, who was cloned as a Na'vi and uploaded with his template's memories from before he died, is one of the new arrivals.

Jake launches a sneak attack on the RDA supply lines. Quaritch leads a group of other resurrected Na'vi "recombinants" of marines in a counter-insurgency operation against Jake that results in the capture of Jake's children. The majority of them are freed when Jake and Neytiri arrive, but Spider is taken by Quaritch, who recognizes him as his son. In order to win Spider over to his side, he decides to spend time with him, and in return, Spider teaches Quaritch about Na'vi culture. Jake and his family flee the Omaticaya and seek refuge at the Metkayina reef people clan on Pandora's eastern seaboard, despite the fact that some tribesmen ridicule Jake and his children for their genetic human heritage. They are aware of the danger that Spider's knowledge of his whereabouts poses to their safety. Kiri forms a spiritual connection with the sea and its creatures, the family acquires reef culture, and Lo'ak makes friends with Tsireya, the daughter of the clan chief Tonowari and his wife Ronal.

Rent or Buy Avatar: The Way of Water 2022 Movie DVD

Pirates of the Caribbean: Dead Men Tell No Tales 26-May-2017