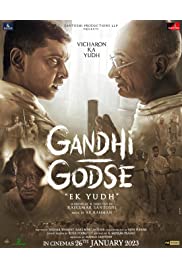 Godse holds Gandhi accountable for Hindu division and suffering. On January 30, 1948, he shoots Gandhi, but Gandhi miraculously survives and pardons Godse. Gandhi begins his Gram Swaraj Movement to encourage villages to become self-sufficient after breaking his ties to The Congress. In the meantime, the system emphasizes Godse's writing and manipulates public opinion against Gandhi, whose interference has caused uproar in the government. Gandhi is arrested as a result of this, and he insists on serving alongside Godse. In prison, they engage in numerous debates, arguments, and even confrontations. Will their disagreements be resolved by this ideological conflict?