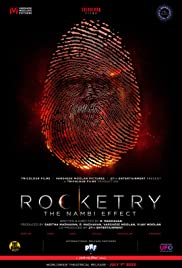 Rocketry: The Nambi Effect is an Indian biographical movie written and directed by R. Madhavan, based on scientist Nambi Narayanan. This movie tells how an ISRO scientist is falsely accused of sedition and thrown out of his post. He is accused of leaking ISRO's confidential information. Nambi Narayan does not give up and fights for many years to get justice. The thing to be seen in this movie will be whether he gets a chance to prove himself or does he have to become a victim of hatred by becoming a traitor to his life.