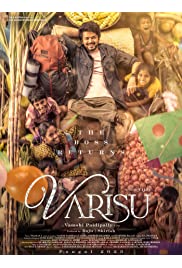 Vijay Rajendran, the youngest son of Rajendran Palanisamy, a prominent business magnate, is disowned and kicked out of the house for refusing to join the family business and opting instead to start a food delivery startup. Seven years later, Rajendran receives the news that he has advanced pancreatic cancer and only a few months left to live. Before his impending death, he decides to disclose his terminal illness and appoint one of his two older sons, Jai or Ajay, as the company's chairman.

Rajendran plans to celebrate his 65th birthday in a grand way with the intention of announcing both matters at the event. In addition, Vijay is invited at the request of his mother Sudha, who continues to consider him to be her son. When Vijay arrives, his house is in disarray. Jai is neglecting his family, including his teenage daughter Ria, while he is with another woman, Smitha, and cheating on his wife, Aarthi. When Ajay is unable to pay off a financier named Mukesh, he offers to reveal the secrets of his company to Jayaprakash "JP," his father's business rival. The two older brothers never talk to each other and constantly fight over who will succeed their father.